She was the forgotten, neglected part of me, of my submissive aspects, the one who cowered silently, naked and covered in dirt waiting for inevetible blows. She no longer understood why they came, or what their purpose was. She didn’t want the pain or the punishment, all she felt was an incredible sense of unworthiness, of not being good for anything. All the same in the midst of this confusion, she wanted to wear the Collar of Truth, to be owned proudly by her-Master-who-is-Life, along with the Servant-of-Spirit and the Fierceness-Creature. She said she wanted it but couldn’t even see what was in the way.

He told this pity-full girl-woman that her problem was this – that she was too arrogant. This was like a slap round the face and pierced through her loathing like a shock of cold water. A sense of how does he see that? What does he mean? He had her attention and she was ready to listen. She was too arrogant, to think she was capable of judging her own worthiness. He would do that, he would help her see.

And he did, through sensations that were both fierce and gentle. He took her right into her fear, and she was bound and trembling at the blade he moved on her skin, his own darkness aided them for his desire to see her fear and her tears was genuine, and this allowed them to flow and be seen. Words of truth were slowly coaxed out of her. The first thing she was asked to say was the last she could utter, initially to even think of it and her throat closed up in fear, her breathing arrested and strangled. Those words were ” i need to be loved by you. ” At the root of the fear was a panic around not feeling, of him cutting off her sex-pearl, taking away her pleasure. He had shown her how her sex and heart were one, and when he asked – are you afraid of having your heart broken? Afraid that akin to your sex being cut, it would render you unable to feel? She cried tears of fear and relief, for this fear to be seen and named.

Through his magic and his attention, he became her Gateway, and after she had declared her deep need to FEEL, her determination to feel no matter what, he fixed the Collar to her neck. Through its magic he bound her to her body, told her she could not just leave it, as was her want and her tendancy in times of fear. Her spirit thrashed and convulsed, trying to escape the intensity, but she was held tight now by Will and True Desire and love and she could not leave. This sank in fully and her fear was immense.

As he began carefully to shave her sex, she could not see and was afraid of the scissors that could cut her pleasure away, afraid of the blade that could remove her woman-hair and return her to a girl. She was not in control and she could not leave, all that was left was to feel the callous scraping on flesh that was not hers…that body must belong to someone else, she felt to one side of it, but still bound and still feeling. How could this be?

His love called to her through her Gateway, out of the cold, warmth and feeling connected returning from her collared neck down. Her vulnerability and her feeling could co exist, together, and as she allowed this her body became hers. And that is when she could feel the beauty of what he was doing for her. No longer distant and cold and cut away, now she could feel his gentle fingers and touch, the shaving razor used like a paintbrush in his artist’s hands.” i feel like your art! ” she exclaimed, and there was joy in her voice, and longing, a deep longing to allow her very essence to become art that is shaped by Life itself, to be so vulnerable to another and the world that you can allow the pulse of deep creation to form you, that you surrender your own willful direction and sense of control into a larger tapestry, one woven from threads of love, and truth, and courage. And to FEEL life respond and claim you and touch you with attentive love, nurture your truth to unfold like nature, as this Man does for her, as this Love and relationhip allows. She wants this, needs this, enjoys this with fullness of being.

She is not a Servant or a Fierceness, she is his-lifes art, she is the art in my soul that longs to create and be created and cannot do so in aloneness. I wrapped her in fear and threw her away, for what use is art, what purpose in the quest of development, in the world of work. I neglected her and told her to wait, to wait till i had the time for her whimsy and for her beauty. I have important things to do, people to help, lives to change, purpose to fill.

She is the beauty in my soul, the joy in my eyes when love fills me, the smile that can not hide my true delight at moments of life. She is not a weak and whimsical girl, she is the bounty of the female who savours and indulges moments of pleasure with the fullness of feeling that they deserve. Not repressed or excessive, not frantic but a syrup that draws lovers close into a languid ecstasy. She is my bliss and she has no shame in expessing that she is beautiful – for life is beautiful – and no shame in expressing that she needs to love and be loved, to enjoy and cherish, to be seen and admired and savoured. she knows the fragile vulnerability of life but this only calls her closer, to inhale and relax into precious moments, to be filled with inspiration, emotion, feeling. To allow herself to move and be moved. Her purpose is not to serve or to fight but to be allowed, to be formed and enjoyed and created with and seen. She was the lost part of my submission, a woman of beauty now just finding her steps and her dance, she is as courageous and important as the rest. I have neglected her in my life but no more. For i want her pleasure and her strength. I do not want to deny her or hide her in fear. She is at the core of my soul and love. And her name is Art.

This is a favourite poem of mine, and also of my grandmother. I remembered it yesterday, and it captures perfectly the essence of enjoyment I’m seeking. I just had a skype chat with Granny – I told her about this project and she was interested. She made a comment that people these days “don’t to have time to savour their thoughts” – that when she was younger people had less money but more time, and were much more adept at creating and imagining ways to enjoy themselves. I’m hoping to get some more ideas from her! At around 93 now, she manages to get out most days for a walk along the country lane, and says hello to “Catherine’s tree” – we have done this walk together, and looked at the sunlight reflecting off a slow flowing river, and shared in enjoyment of nature and life. I hold to and savour these moments. 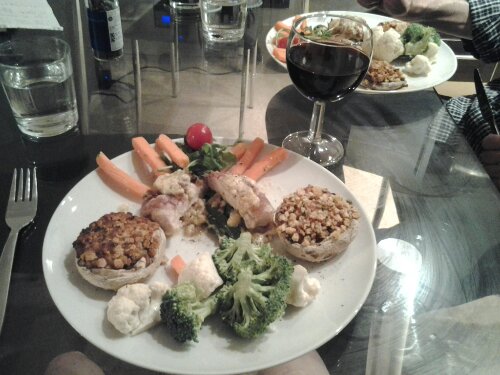 Being taken out for dinner is always nice, but actually what I enjoy even more than that is someone preparing food for me at home. Actually for me creating with food, especially if it combines healthyness and taste, is one of my love activities. It doesn’t have to be an effort either. Last night Jeff discovered the concept of “baking” – and that actually putting thing in the oven is easy (especially if it is ready made Marks and Spencers food). Even with this though you can add extra creativity. In the last month I have been enjoying being artful with food, especially raw vegetables, having fun mixing different colours and layouts. Jeff tells me it is like magic the way I make these beautiful plates of food appear, and last night he had fun creating himself, arranging the carrots and salad with a nice form and colour. Being surprised with this was brilliant! The enjoyment of the visuals, and the extra care that had gone into the food was really good. If you pay to go to a posh restaurant a lot of what makes te food appear better is how it has been arranged on the plate. Well – turns out you dont need to be a posh chef to have fun with this. Easy way to have extra enjoyment in life – and you can do it for yourself as well. I keep a range of raw veg in the fridge and will chop up bits of them to make a satisfying colourful salad in less than 5min.

This is an important one to get thoughts clear on. What is the difference between pursuing and fostering a life of enjoyment and simply being hedonistic? Is there anything wrong with being hedonistic? Where does the vaguely negative connotation come from? Am I a hedonist because I want pleasure? END_OF_DOCUMENT_TOKEN_TO_BE_REPLACED